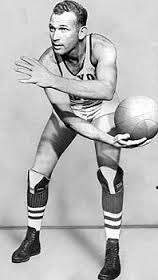 Bob Karstens was the first white player to be signed by the Harlem Globetrotters. In 1942, when Goose Tatum, the Trotters star performer, was drafted into the Army, Karstens was signed as his replacement. He helped create many of the Trotters most famous gags including the “Magic Circle” pregame routine, the “yo yo” basketball and the behind the back trick shot. After two seasons on the Globetrotters’ roster, Karstens remained with the organization for another decade as a player and manager of opposition teams.