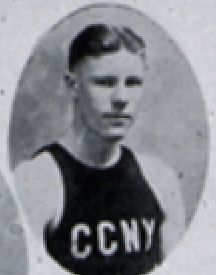 Cliff Anderson played two years of varsity basketball at City College of New York under the tutelage of famed early professional basketball star, Nat Holman, who said that Anderson was the best big man he had ever coached.  Anderson, the team’s best defender and leading scorer was instrumental  in the success (22-3 record over two seasons) of the CCNY squad. Anderson had a meteoric pro basketball career. Within a few seasons as a pro, he ranked as one of the very best big men in the game. In an era when most centers seldom scored very much, Anderson stood out because he was usually the leading scorer on most of the teams he played for. Tall (6’04) by the standards of the era, Anderson elevated the ball over his head, away from shorter defenders, and and released his shot without bringing it down to his chest.  In 1926, after just three seasons of pro basketball, Anderson announced that he was retiring from the game, at age 23, to enter business. While Anderson did continue to play for a number years afterward on a limited basis, his focus definitely shifted away from the sport. Anderson had a long and successful association with the Kinney Shoe Corporation, eventually  becoming the company president in 1959. He also  served on the Board of Directors of F.W.Woolworth and the Coca Cola Bottling Company.