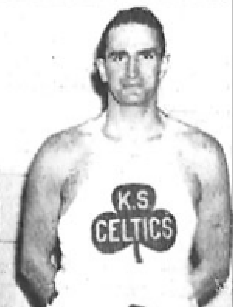 Al Kellett briefly attended Columbia University, but  left after one year to join the Navy in the spring of 1919.  He returned from the service in September of 1922. In June of the following year  Kellett appeared on the roster of the Philadelphia Phillies without ever previously playing a single game of professional baseball on any level.  He pitched in five games for the Phillies and one game for the Red Sox the following season season. Kellett enjoyed considerably more success in professional basketball. Kellett also began his professional basketball career in 1922, when he signed to play for the Bronx Dodgers, a powerful independent team. While he never became a big star, Kellett remained in demand as a player from the early 1920s until the early 1940s. Kellett was never flashy, but he exuded a quiet workman-like strength and the ability to remain cool in pressure situations. He was still active as player  in 1941, when he joined the Merchant Marine at the outset of World War II. During his career, Kellett won back to back championships as a member of the Brooklyn Visitation, the 1930-31 American Basketball League champions and the 1931-32 Metropolitan Basketball League titlist. Kellett died  in the summer of 1960, at age 58, in New York City, following an intracerebral hemorrhage.