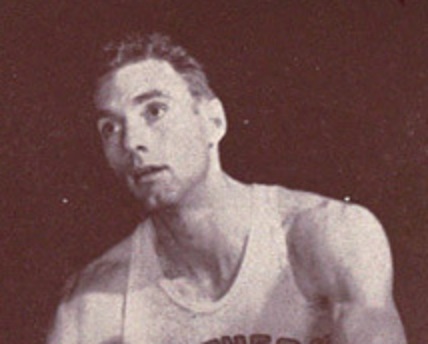 Alex Hannum was the Los Angeles City high school player of the year at Hamilton High School and then went on to star at USC. Hannum played one year in the National Basketball League and eight seasons in the National Basketball Association. Hannum was never a star in the NBA.   He was a 6’7″ bruiser, whose  job was to rebound and play defense. He played for teams in Syracuse, Baltimore, Milwaukee, St. Louis, Rochester, and Fort Wayne. During the 1956-57 NBA season, while still active as a player, Hannum took over the coaching duties of the St. Louis Hawks. The Hawks lost in the finals to Boston, but came back the following  season  to beat the Celtics in the finals and capture the 1957-58 NBA championship. It was the beginning of  sixteen year coaching career that included two NBA and two ABA titles. Hannum never stayed with any team very long.  He spent three years with Syracuse, three with San Francisco , two with Philadelphia (where the team posted a 68-13 record and won the  championship), one with Oakland of the ABA (and a championship), two with the San Diego Rockets  and, finally, three seasons with the Denver Rockets.  In 1998, Hannum  was  inducted into the Basketball Hall of Fame.