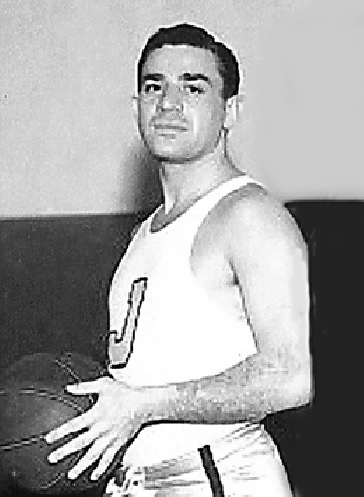 Allie Schuckman graduated from Thomas Jefferson High School in Brooklyn. SChuckman enrolled at Long Island University, but a short time later transferred to St. John’s where he became a star of the famed team known as the “Wonder Five” the most highly publicized college team of the late 1920’s and early 1930’s. The St. John’s  squad compiled an 86-8 record over a four year period. Schuckman was one of the most accurate shooters of the era. He teamed with backcourt whiz, Mac Kinsbrunner, to provide the defensive- minded Jewels with most of the team’s offense. In 1931-32 season, the “Wonder Five” turned pro as a unit and became known as the Brooklyn Jewels. In their first season as pros, the Jewels lost in the finals of the Metropolitan Basketball League to the famed Brooklyn Visitation, but came back in 1932-33 to win the MBL title. When the MBL folded in 1933, the Jewels joined the resurrected American Basketball League. Although Schuckman consistently finished among the league’s top scorers, the Jewels found success hard to come by in the ABL and usually finished in the middle of the pack. When the team slumped to a dismal 4-15 mark in the second half of 1936-37, owner-coach Eddie Wilde released several of the original Jewels including Schuckman. He quickly signed with Kingston, but returned to the Jewels as substitute player at midseason. Early the next season he was released by the Jewels so he could take the position of player-coach at Wilkes Barre. He lasted as coach only four games, but found renewal as a player enjoying his best season in four years. He was rehired as coach the following season, but with equally disastrous results. Schuckman returned one last time to the Jewels in 1944-45 to bolster their war-depleted roster.