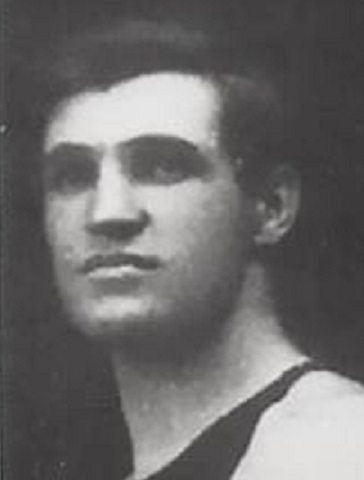 Alois Getzinger grew up in Trenton, New Jersey, a hotbed of turn of the century professional basketball. Getzinger attracted little attention during his first years of playing semi-professional basketball in Trenton. He earned the nickname of  the “human steamroller” because he was known more for his boundless energy and fierce determination than his athletic ability. Getzinger received his first opportunity to play against top level competition when he was signed for the 1903-04 season to play for Westfield in the Western Massachusetts Basketball League. The following season, Getzinger played for Lowell in the New England Basketball League where he was heavily influenced by the  coaching of  Toby Matthews, one of the best centers of the era. Getzinger’s growth as a player continued during  the season and half he spent playing independent basketball in Tamaqua, Pennsylvania  alongside Harry Hough and Charley O’Donnell, two consummate professionals.   Mid-season 1906-07, Getzinger signed to played for Mckeesport in the Central Basketball League where he remained for five seasons. By the time he entered the CBL, Getzinger had matured into one of the savviest centers in the game. Mckeesport won back to back CBL titles in 1910 an 1911 and demolished De Neri, the Eastern Basketball League champions in four straight games in the Spring of 1911, in the first-ever series to determine the national professional championship. In the Fall of 1911, Getzinger signed  to play for his hometown EBL Trenton team, where  he remained a mainstay for the next six seasons.