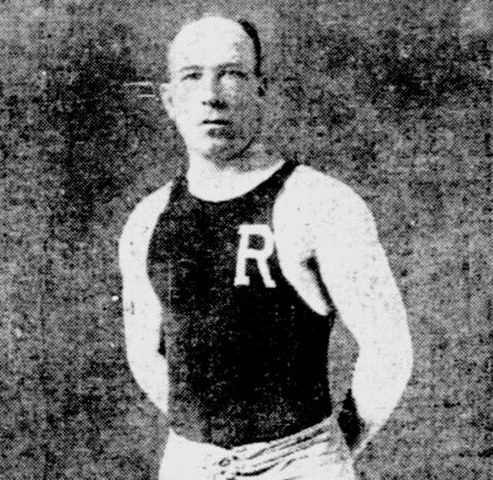 Andy Sears was a crusty, barrel-chested, balding, tough-as-nails player from Chicopee Falls, Massachusetts. Sears began his basketball career with professional teams in Massachusetts and Connecticut. In 1907, he signed with the McKeesport team in the Central Basketball League. Sears distinguished himself as the team’s designated foul shooter, but the team finished a distant last in the league standings. The team was strengthened by the signings of Charley O’Donnell, Mio Boggio and (one year later) George Morris. Beginning with the 1908-09 season, the Sears-coached squad won four titles and finished second three times during the next eight seasons. McKeesport won back-to-back CBL titles in the 1909-10 and 10-11 seasons. When the CBL folded just prior to the start of the 1912-13 season, the team took over the moribund Reading franchise in the Eastern Basketball League and immediately captured the league title in their first season. In 1914-15, they were co-champions with Camden. Sears played the game with a controlled fury, seemingly on the on the verge of throttling someone at any moment. In an era of very rough, physical basketball, punctuated by many fights, Sears led a team that prided itself on its defense and its ability to subdue opponents by intimidation. For many seasons, Sears was considered the best all-round player in EBL. There were better defenders and more talented offensive stars, but no other player in the league combined the two skills as well as Sears. He and backcourt teammate George Morris led the league’s stingiest defense, while Sears ranked among the league’s most accurate shooters from the field and the free-throw line. Sears wrapped up his nineteen year pro basketball career back in Massachusetts with two seasons playing for Springfield in the Interstate League.