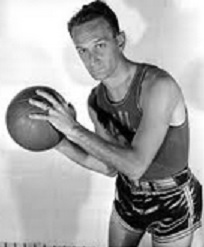 Angelo Musi was captain of both the Temple baseball and basketball teams, Musi earned all-American honors during 1941-42 basketball season.  He played two years of baseball as a second baseman, batting .300 his sophomore year and .329 his junior season. Following his graduation from Temple, Musi played professional basketball with the Wilmington Blue Bombers and the Philadelphia Warriors. Musi, a renowned long-range shooter and skilled playmaker.   was team captain of the  the Warriors when they won the 1946-47 championship of the Basketball Association of America.