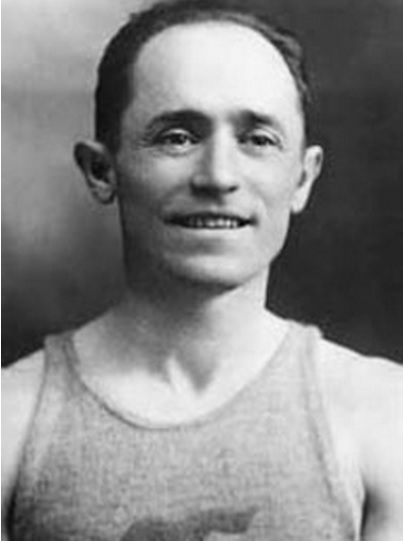 Barney Sedran was cut from the basketball team at De Witt Clinton High School in New York City because he was too small. While Sedran never grew beyond 5’3″ in height, he rose in stature to become one of the giants of the early professional game. Sedran developed his love for the game playing basketball in settlement-house leagues on New York’s Lower East Side. In one of these leagues, he met Marty Friedman with whom he enjoyed a remarkable professional partnership and a lifelong friendship. Sedran starred for three years at City College of New York  before he graduated in 1911.That fall, he began his professional career with Newburgh of the Hudson River League where he joined Marty Friedman. The “Heavenly Twins” has they became known, played three seasons with Utica of the New York State League where they won the 1913-14 championship. When the NYSL folded in January of 1915, Sedran and Friedman signed with a little-known team in Carbondale, Pennsylvania. They immediately embarked on a record- breaking thirty-five game win streak, that was finally broken only when Sedran missed a game to be in New York to attend his mother’s funeral. Contemporary accounts of Sedran’s play always praised his court- intelligence and courageous style. Fast and deceptive, Sedran was a great outside and inside shooter, smart passer, and great ball handler. He was always in motion, setting up plays that resulted in baskets. Veteran defender Allie McWilliams commented that guarding the 5’3″, 125-pound Sedran, was like guarding a mosquito. By 1920, Sedran was making over $10,000 a year playing basketball, an enormous sum at the time. During the 1920-21 season, he and Friedman led Albany to the NYSL title and Easthampton to the Interstate League title. The same season, he played with the team that Sedran himself described as the very best team he ever appeared with, the New York Whirlwinds. Along with Sedran and Friedman, the Whirlwinds featured Nat Holman, Chris Leonard, Ray Kennedy and Harry Riconda. Matched against the Original Celtics for the mythical pro title, Sedran led all scorers from the field as the Whirlwinds crushed the Celtics 40-24 in their first meeting. The Whirlwinds lost the second game by a basket and the third game was never played when Holman and Leonard jumped to the Celtics. The 1923-24 season saw the amiable split of the dozen-year partnership with Marty Freidman when Sedran was lured west to Fort Wayne, Indiana to captain the powerful Knights of Columbus squad. Sedran turned successfully to coaching in the ABL in the thirties and forties. He won two league championships at the helm of Wilmington in 1942 and 1944.