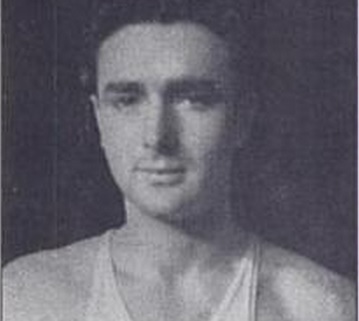 Ben Stephens enjoyed an excellent college career at the University of Iowa in the late 1930s as a fast-moving guard. In his senior (1938-39) season, he was named to the All-Big Ten squad and also received some honorable mention as an All-American. After graduation, Stephens signed to play professional basketball with the Goodyear Tire Corporation of Akron, Ohio which sponsored a team in the National Basketball League. In the fall of 1939, Stephens joined an experienced squad and quickly impressed teammates and opponents alike with his hustle and determination. In his rookie season he displayed a fine set shot and great skill at penetrating to the basket. Stephens was a named to the NBL all-star team each of his three seasons in the league. In 1940-41, he led the NBL in scoring and was named the league’s MVP. In 1942, the Goodyear Corporation dropped its sponsorship of a professional basketball team. Stephens choose to remain with the company effectively ending his pro basketball career at age 25.