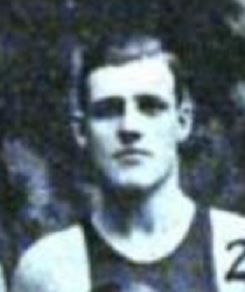 Bernie Dunn, as a 20-year old rookie, made a sensational pro debut in the tough Pennsylvania State Basketball League. He was the center for the Pittson squad that posted a 19-2 record and easily captured the 1914-15 PBL championship.  Dunn repeated the feat the following season as the center for his hometown Wilkes-Barre squad. After winning the PSL title, the Barons went on to capture the national pro championship by defeating the Eastern League champions, Greystock,  and the Interstate League champions, Paterson, in a post season tournament.  Dunn played professional basketball for  fifteen more season  seasons without winning another champion. He came frustratingly close in the early 1920’s playing for Trenton in The Eastern Basketball League. During the 1921-22 season, Trenton posted a league-best 39-8 record, but lost in the playoff finals. The following  season, Trenton had another juggernaut team that had posted an 18-4 record when the  EBL folded at mid-season.