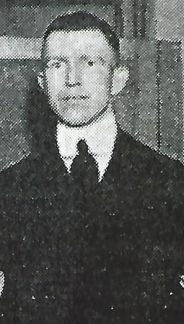 Twenty-two year old Bill Hepinstall entered professional basketball in 1913 as the player -manager of his hometown Rensselaer, New York team. In 1914, Hepinstall was transferred to Carbondale, Pennsylvania by his employer, the Delaware and Hudson Railroad. Within a few months, he managed  to acquire a franchise for Carbondale in the Intercounty League, an obscure minor league in Western Pennsylvania. In January of 1915, the New York State Basketball League folded. Hepinstall offered  Barney Sedran and Marty Friedman, two of the best players in the NYSL, a lucrative revenue-sharing deal  to play for his Carbondale team. With the two new stars in place, Carbondale won 35 straight games before suffering a defeat when Sedran was away to attend his mother’s funeral. After service in World War I, Hepinstall returned to pro basketball in 1919 when he landed a  franchise for Albany in the  New York State Basketball League. With Sedran and Friedman as the nucleus of his new team, Albany posted a 17-1 record to win the first half of split season, but finished second in the second half .  The league scheduled a five-game playoff series, but because of a dispute over how box office receipts should be divided, the games were never played and  Troy and Albany were declared  co-champions. In 1920-21, Albany won both halves of the split season to reign as undisputed champions. Prior to the start of the 1921-22, Hepinstall tried unsuccessfully to move his franchise to the  rival Eastern Basketball League and ended up sitting out the first half of the NYSL season, Albany returned for the second-half, but finished out of the playoffs as it did again the following season. Just one game into the 1923-24 season, Hepinstall moved the team to Gloversville. He left behind an overall 106-39 record in Albany.