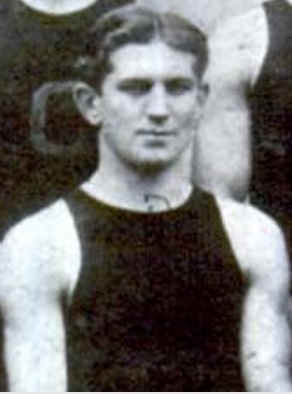 Bill Nerron spent six years of his professional basketball career with the Conshohocken Giants, one of the powerhouse turn of the century Philadelphia teams. During those years, he progressed from untested seventeen year old high school kid to one of the premier players of his era. For the 1903-04 season he signed to play in the New England League, but after one year he returned to Conshohocken to help the Giants win the Philadelphia League championship two of the next three years. For the 1908-09 season, Herron signed a contract to play for the Central League Homestead club. He played a key role in the team’s successful run to the CBL championship. Herron was Homestead’s best defender as well as its designated free throw shooter. After the championship season, Homestead declined in the standings the next two seasons, but Herron’s reputation as one of the best players in the league continued to grow. When the CBL collapsed in the fall of 1912, Herron returned to the Philadelphia area to play with Camden in the Eastern League for the next three seasons. Herron wrapped up his sixteen-year pro career with the 1915-16 EBL champion Greystock club.