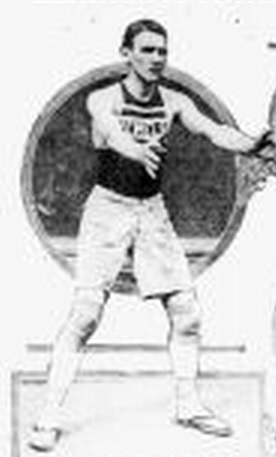 Bill  Kummer began his professional basketball career as an 18-year-old with his hometown Butler, Pennsylvania team in the newly formed Central Basketball League. He played both guard and forward during his rookie season. Kummer played with three teams over his  six seasons CBL seasons. During the last three seasons, he served as the team’s designated free throw shooter. During the 1911-12 Season, KUmmer acored 1,404 points. No other pro player topped the 1,000 point mark, until Joe Fulks reached the plateau for the Philadelphia Warriors during the  1946-47 season.   When the CBL failed to start the 1912-13 season, Kummer signed with the Jasper club of the Eastern Basketball League where he successfully teamed with another former CBL star, Dutch Wohlfarth. The partnership brought a EBL championship to the Jaspers in 1913-14 with Kummer also leading the league in scoring. His triumph was short lived, however, when Wohlfarth did not return to the team the next season and the Jaspers plunged into last place. Frustrated, Kummer left then team at mid-season  and signed with a minor league team in  the Western Pennsylvania League that was closer to his home in Butler.