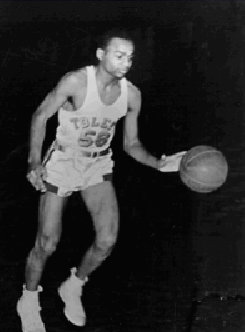 “William “Billy”  Jones led Woodward High School to back to back Toledo city championships in 1928-29 and 1929-30. Jones lettered in basketball in 1934, 1937 and 1938 at the University of Toledo. A play-making guard with a deadly outside shot, he teamed with two-time All-American Chuck Chuckovits to help put the Toledo Rockets on the national map in the mid-1930s.  The 1937 team started the season with a 10-0 record on route  to a 18-4 season record. The Rockets followed up with a 14-6 mark in 1938.  Jones played professional basketball for a half dozen seasons, primarily with touring teams such as the Harlem Globetrotters and the Toledo White Huts.