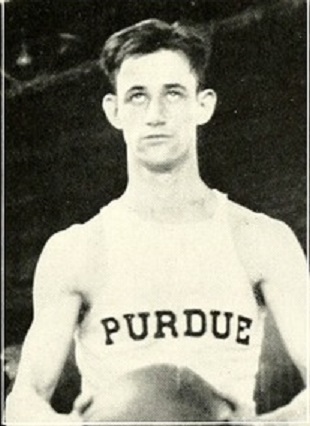 Blair Gullion was an All-Big Ten and All-American basketball player at Purdue University. He led the Big Ten in scoring in 1922. Gullion received his bachelor’s degree from Purdue University in 1924. Gullion had modest success as a professional player, but earned a living for over thirty years as a college basketball coach. From 1927 through 1935, Gullion was the director of physical education and athletics, and coached basketball and baseball at Earlham College in Indiana. From 1930 to 1935 his basketball teams won 57 games and lost 13. His 1933 basketball team went undefeated and his teams had a string of 24 consecutive victories. His next job was at University of Tennessee where he coached for the next three seasons (1935-38). Gullion was hired  to coach Cornell University for four seasons (1938-42), followed by two seasons at the University of Connecticut (1945-47.) Gullion’s final college coaching position was an eleven year stint (1947-59) at Washington University in Missouri.