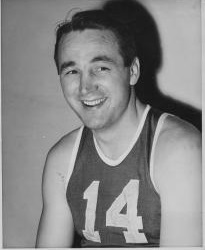 Bob Dille  was  a 4–time basketball letter winner at Chesterton High Shchool in Indiana. He also captained the team for  3 years, earned 4 baseball and 3 cross country letters. For the next half dozen years, he played amateur basketball on teams in Northern Indiana. In late February of 1941, Dille signed with the Hammond team in the National Basketball League and played in three late-season games. In the fall of 1941, Dille, married,with two small children and working full time, entered Valparaiso University as a freshman. While at the school he became the Indiana collegiate scoring champion,  a PIC magazine and Helms All- American in ’43, and a LOOK magazine All-American in ’43, ’44 and ’45. He was named to the Boston Garden all-star team ithe in 1944, and MVP of college all-star game. Dille played  professionally with the Detroit Falcons in the Basketball Association of America (an NBA forerunner) for one season and then coached high school basketball in Indiana for 31 years. In 1989, Dille was inducted into the Indiana Basketball Hall of Fame.