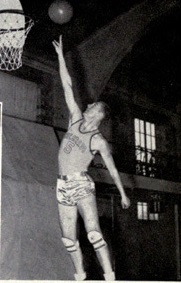 Bob Doll was a star athlete at  Chaffey High School in Ontario, California and played collegiately at the University of Colorado from  fr1939 to 1942, Doll was a strong rebounder and tough defender and also  possessed a fine shooting touch. As a sophomore in 1940, Doll led the Buffaloes to appearances in both the NCAA and NNIT tournaments.  Doll led Colorado to the NIT title and was named the tournament Most Valuable Player after averaging 15.5 points per game. Two years later, Doll was named a   second team All-American and led Colorado to its first Final Four appearance. Doll  was named an AAU All-American in 1943 while playing for the Denver American Legion team. Doll served for three years in the Navy during World War II before he joined the St. Louis Bombers in 1946 to play in the in the inaugural season of the Basketball Association of America. Doll played center for much of his pro career. He often went up against bigger and stronger opponents, but held his own with his greater agility and aggressive fronting defense. Two years later, in 1948, Doll signed  with the Denver Nuggets in the National Basketball League, but at mid-season was released and signed with the Boston Celtics in the BAA, where he finished out his career over the next year and a half.