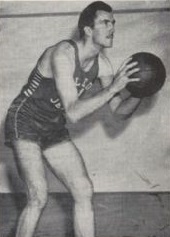 In his early years as a high school basketball  player, Bob Gerber was taller than everyone else, but had  limited basketball skills. He also had extremely poor vision and a very unorthodox shooting style. Gerber did did not earn a varsity letter  until his senior year at Akron South High School.  Gerber did not receive a single offer to play college basketball. At that point, no one would have predicted the future course of his basketball career. During the next two years, Gerber worked on his basketball skills while he played AAU basketball ball in Akron. By the time  he enrolled in college at the University of Toledo, Gerber had developed an unstoppable hook shot that  earned  him All-American honors in 1941 and 1942.  As a senior, he became the all-time collegiate scoring leader for the state of Ohio and broke the national college single-season scoring record with 532 points. Following the close of his college career, Gerber played one game for Toledo in the National Basketball League before joining the Army during World War II. Gerber returned to the NBL in 1945 and had consecutive productive seasons with Indianapolis and Toledo.  The following season his performance dipped and his pro basketball career was over after just three seasons.