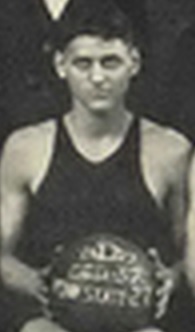 Bob Gunn, a graduate of Detroit Cass Tech High School, lettered in basketball four years at the City College of Detroit, now known  as Wayne State. Gunn was the starting center  of the 1925, 1926, 1927  , and 1928  teams. . Gunn was a prolific scorer, finishing with 756 career points in an era when 600-career point scorers were very rare. Gunn led the nation in scoring with 267 points in the 1927-28 season. leading City College of Detroit’s ‘ famous “Point A Minute Team” to an 18-1 overall record, best in in school history.  The 1927-28 team” may have been undefeated that season, if iGunn had not suffered a badly sprained ankle before playing Manhattan College in New York. Without Gunn in the line-up, Wayne State fell behind 31-19, with only three minutes remaining,  Gunn entered the game and scored the Griffins’ last 11 points of the game, but Manhattan hung on to claim a34-30 victory. Gunn graduated from Wayne State’s Medical School in 1933. Nine years later, Gunn returned to medical school to receive his certification as a surgeon and anesthesiologist.