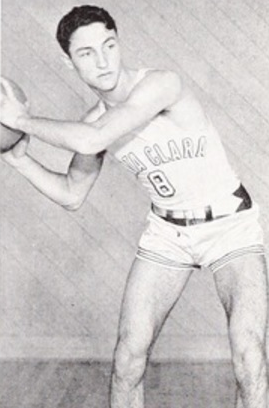 Bruce Hale attended Galileo High School in San Francisco and then went on to college at nearby Santa Clara University. Hale spent five years in the service during World War II. While stationed in Dayton, Ohio, he was launched into prominence when he led an independent team, the Dayton Acmes, to the finals of the World Basketball Tournament in 1945. After his discharge from the service, he  remained in the Midwest where he enjoyed a successful five  year professional  career. In his very first year as a pro, while playing for the Chicago Gears, he was installed as player-coach late in the season and guided the team to the National Basketball League championship. In 1954, Hale was hired as head basketball at the University of Miami and compiled a 220-112 record over the next thirteen seasons. Hale’s most successful seasons at Miami featured Rick Barry who led the NCAA in scoring during the 1964-65 season with a 37.4 points-per-game average and who would became his son-law. In 1967. Hale  left Miami and signed as the coach of the Oakland Oaks in the newly formed American basketball Association. Barry also signed a contract with Oaks, but an injunction forced him to sit out the season. Oakland posted a 22-56. record and Hale was ousted as coach before Barry joined the team the following season. Beginning  in 1970, Hale returned to college coaching for three years at  St.Mary’s College of California and posted a 9-33 record.