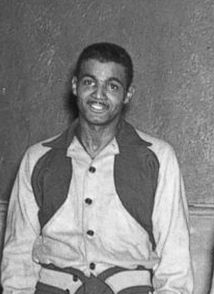 Eyre “Bruiser” Saitch was a was a member of the New York Renaissance (Rens) basketball team for fifteen seasons, spanning from 1926 until his retirement in 1941.  Saitch was an integral member of the Rens when thy captured the inaugural World Professional Basketball championship, played in Chicago in 1939. Saitch, as a member of the Renaissance team was enshrined in the Naismith Memorial Basketball Hall of Fame. Erye was also a national level tennis player. In 1926, Saitch  won the American Tennis Association singles title.