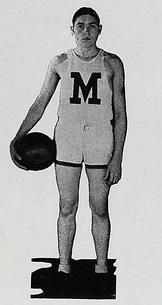 Harold Richard “Buck” Burkle was born and raised in Columbiana, Ohio, the third of the Burkle boys to attend Mount Union.  He played center, guard, and some forward on the men’s basketball team from 1926 thru 1929 and was team captain from 1926-28. His center and full-court shots won numerous last second games leading to Ohio Conference Championships in 1927-28-29.  BUrkle  was an All-Ohio selection in 1929. He also played 1st base for the baseball team and also participated on the track and field and tennis teams.   After graduation in 1929,  Buckle joined Goodyear Tire & Rubber Co. of the most powerful AAUeam in the midwest.  where he played basketball Champions in 1938, and a member of the 1940 Goodyear Baseball Champions.