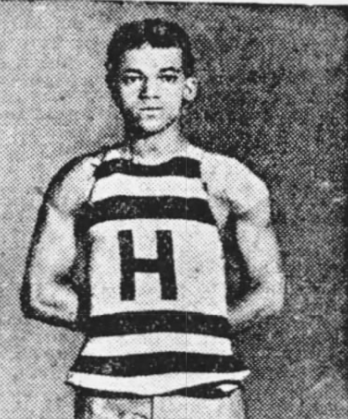 Harry “Bucky” Lew was the first African-American to play professional basketball. Lew first attracted attention as a teenager with his speed and agility on the court. When he was just 18 years old, Lew signed with the Lowell Pawtucketville Athletic Club  of the New England Basketball League for the 1902-03 season. Before the 1903- 04 season, Lew’s contract was purchased by the Haverhill team in the same league. He enjoyed an outstanding sophomore year as a professional until late in the season when he was slowed by a dislocated shoulder. Lew dislocated his shoulder again  in a collision early the  following season, but still managed to play in more games than other player on the team. Although Lew once scored 14 points in a game, a big number in 1902, he was  not a good outside shooter. He scored most of his points on drives to the basket. Lew was an excellent passer and showed real skill as a defender. He was particularly adept at guarding some of the league’s faster players such as the famed Harry Hough. Haverhill finished in first place during the first-half of the split season ahead of  the highly favored Natick club that featured Hough and Joe Fogarty. While Lew was generally well-received by fans and players alike, he did face some episodes of discrimination. After some rough matchups early in the 1904-05 season, some Natick players protested Lew’s presence in the league. President Fred Cunningham quickly fined the Natick team $50 and said there would be no color line in the New England Basketball League. The same two teams met in the playoffs, with Natick winning the championship without any further incidents. In the end, Lew’s major league professional basketball  career was cut short not by prejudice, but by the harsh realities of early professional basketball. The NEBL, dependent on highly-paid stars from Philadelphia, disappeared under a sea of red ink after the 1904-05 season. Major-league basketball in New England did not take hold again until after World War II. While he never played major league basketball again, Lew remained a popular figure throughout New England playing on semi-professional teams for another two decades, until the mid 1920’s, when he was over 40 years old.