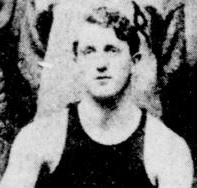 Harry “Bushel” Beggs” was a rarity among early professional basketball player.. Most players of  the era moved directly from high school into independent or pro league basketball. Beggs played college basketball at three colleges during the two  years before he joined the Reading Independents in 1905. The following season (1906-07), Beggs finished fourth in individual scoring in the inaugural season of the Central Basketball League. In the fall of 1907,  Beggs rejoined the Reading Independents where he captained the team and was its leading scorer for the next two seasons. Playing top-notch teams including the independent powerhouse Paterson Crescents and Eastern and Central Basketball League teams, Reading won 113 and lost 20 games.    Beggs played in  the CBL for three seasons before returning once again to Reading where he was hired to captain the 1912-13 EBL team. Beggs joined a talented squad that included many of his former teammates from the powerful Reading Independents of three seasons early. Everything was in place for what turned out to be the greatest season of Beggs’ career. Reading won the EBL championship and then won a playoff series against the famed Troy Trojans for the overall professional basketball championship.