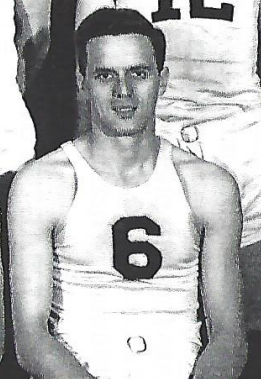 Kasmer “Cas” Ostrowki was  a basketball star at West Wyoming High School in Eastern Pennsylvania. As a freshman and a sophmore, Ostrowski led the University of Scranton in scoring. After serving in the Navy during World War II, Ostrowski returned home in January of 1946. Over the the next five  seasons, he played for the Wilkes-Barre Barons in three different minor leagues.  Ostrowski finished as the second-leading scorer in the league all five seasons. In the fall of 1950, Ostrowski signed to play for the Grand Rapids Hornets in the newly-formed  National Professional Basketball League. After appearing in just two games,  Ostrowski was injured in  car accident traveling to a game in St. Paul.  By the time Ostrowski recovered and was ready to play, the  the PBL had folded. Ostrowski returned to Pennsylvania where he finished out his career.