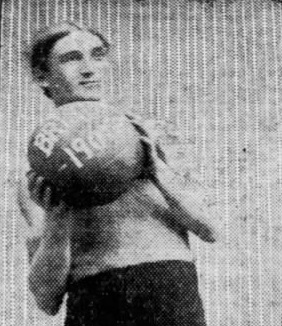 Charlie Klein  was  one of the first great long distance set shooters in the pro game. In 1896, Klein  debuted with the South End Athletic Club  in the powerful Trenton city  league.  By 1897-98, he was the top scorer on the mighty Trenton Athletic Club which compiled 27-1 record.  When the National Basketball League formed the following season, Klein was among the most sought after players, but he signed instead with the independent Mercer County Wheelman. Klein finally joined the NBL in 1899, when he signed with the new Bristol entry. Klein led the NBL for the next three seasons in field goals. During the 1901-02 season, Klein teamed with Harry Hough to bring the NBL title to Bristol. When the NBL folded in 1903, Klein declined high- paying opportunities to play professionally in Massachusetts in order to remain in the Trenton area where he had embarked on a career in banking. When the Central Basketball League was formed in 1906, Klein again was besieged with offers to move west and play in the new major-league circuit, but once again declined. Klein continued to work in the banking business and remained active playing with independent teams around Trenton. When the Eastern Basketball League was formed in 1909-10, Klein signed with his hometown team. He finished third in the league in field goals and was a key element in Trenton’s capture of the championship. Klein sacrificed many of his prime years as a player to establish himself in business. Despite his relatively few active seasons, he deserves to be remembered as one of the first great offensive stars of the early pro game.