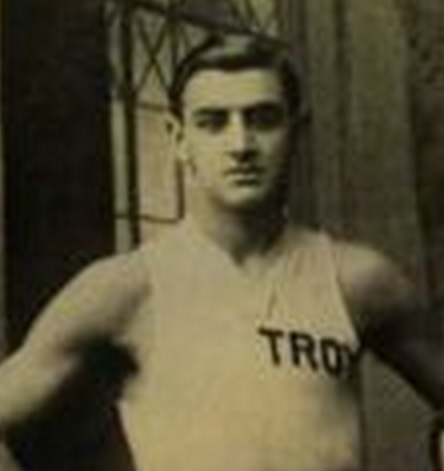 Charles “Chief” Muller, a native of New York City, began his pro career in 1904 with the legendary 23rd St. Wanderers where he was tutored by famed center John Wendelken. Within two seasons, Muller had gained a considerable reputation in NYC basketball circles because of his unique combination of size, strength and speed. In 1906, be joined South Side, a team in the new Central Basketball League. During his three seasons with South Side, Muller joined the ranks of the pro games top stars. In 1910, Muller was signed by Lew Wachter to a contract with the Troy, New York club where he would enjoy the most satisfying years of his long career. Muller was a key contributor as Troy captured three consecutive league titles. After three and half seasons in Troy, Muller became a basketball vagabond for the remaining years of his career. During the last eight years of his career, he wore the colors of twenty-three different teams. A handsome, powerfully built athlete, Muller was always a fan favorite and box office attraction. He always played the game with style and aplomb. Muller was deceptively quick for a big man, which allowed him to successfully play all three positions at different times during his 18-year career. Muller was consistently among the top performers in every league in which he played, On ten occasions he finished in the top-ten individual scorers and four times was a league-leading point scorer. Muller enjoyed the best season of his late career upon his return to Troy for the 1919-20 season. The team posted a 41-8 record and won the second half title of the New York State League. When his playing days were over, Muller briefly turned to refereeing and also coached Manhattan College to a 22-13 record for two seasons in late 1920’s.