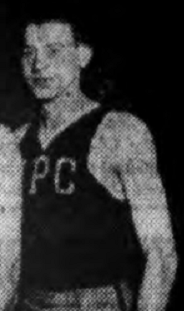 Chuck Huntington played professional basketball for a dozen seasons. By December of 1938, he had been retired for four years. A few days before Christmas,  Huntington  went to see an American Basketball League game between his hometown Troy Haymakers and the visiting Union City Reds, who showed up with only four players because the car carrying the remainder of the team had been involved in an accident. With the stands full, neither team wanted a forfeit, so Huntington was recruited from the stands to play for the for the visiting team. Huntington managed to play a credible game and scored a basket that turned out to be the margin of the Reds’ 34-33 win over the home team. Huntington’s whimsical appearance in the game was a fitting footnote to the career of a popular player who enjoyed a reputation as a hard worker and good teammate. While he only played in seven major league games, Huntington was considered a star in the upstate New York independent basketball world of the 1920s and 1930s. When strong independent teams such as the Corinth Internationals, the Amsterdam Amaicus or the Utica Boosters appeared in an newspaper ad for an upcoming game, it was Huntington who was the marquee player.