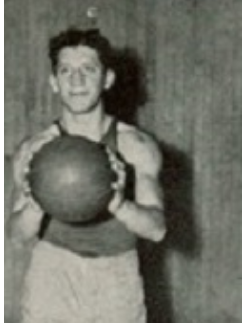 Simon “Cy” Boardman was  captain of the of the NYU Violets for three seasons in the late 1930’s. Boardman entered pro basketball in 1938,  playing in  the American Basketball League. After a promising rookie season with Troy, Boardman’s next four seasons in the ABL were forgettable. After military service in World War II, Boardman returned to the ABL in 1944 and enjoyed the best seasons of his career, finishing among the top-ten scorers three seasons in a row. Boardman died in 1950 at the age  of 34 after a long illness.