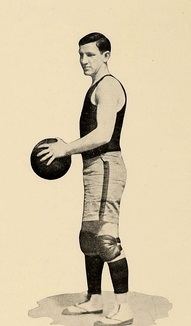 Danny McNichol was one of the greatest athletes in the history of the University of Pennsylvania. He lettered in baseball, basketball and football and captained both the baseball and basketball teams. McNichol  was a three-time Helms Foundation Basketball All-American, being chosen  in 1919, 1920 and 1921. Like many college-educated basketball stars of his era, McNichol showed limited interest in the rough and tumble professional game. He did join  Tri-Council in the Philadelphia Basketball League late in 1922-23 and played well in 11 games.  The following season, in what would be his only full season in professional basketball, he led Tri-Council to the PBL championship series, where they lost  lost to the Philadelphia SPHAS. Throughout the 1920’s, McNichol served as  assistant coach for his brother, Ed McNichol, who was the head men’s basketball coach for the University of Pennsylvania from 1920 until 1930.