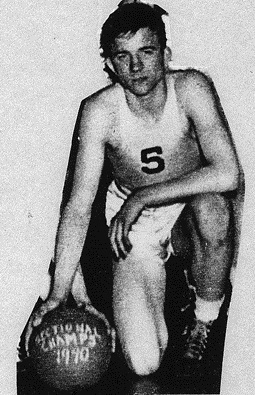 Dave Strack graduated from Shortridge High School in Indianapolis, Indiana where he was the basketball team’s captain and MVP in 1941 and named to the Indiana State All-Star team. Strack was a three-year letter winner at the University of Michigan, earning MVP honors in 1943 and 1946. He briefly played professionally for Indianapolis in the National Basketball League. He served as an assistant basketball coach at Michigan from 1948 to 1959.  After a one-year coaching stint at the University of Idaho in 1959, Strack was named Michigan head basketball coach in 1960. Strack led Michigan  to three straight Big Ten championships (1964-66) and back-to-back Final Four appearances in 1965 and 1966. The 1964-65 Wolverines were 24-4 overall and  ranked No. 1 in the country before  Michigan was defeated in the NCAA championship game by UCLA. Strack was named the 1965 National College Coach of the Year. He coached Michigan basketball from 1960-68, compiling a 113-89 record.