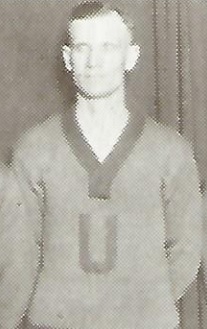 Dick  Leary  first played pro ball in and around his his hometown, Lennox, Massachusetts. In 1910, he was recruited to play in the fast Central League for Uniontown, but his play was far from impressive. Released at midseason, Leary signed with Troy of the Hudson River League , but was released again at the end of the season. After his unimpressive entry into the professional game, Leary gradually matured over the next three seasons to become the best center in the New York State League. By 1914, his stock had risen to the point that perennial powerhouse Troy traded four outstanding veterans (Chief Muller, Flo Haggerty, Swede Grimstead and Bobby Vance) to Gloversville to acquire Leary. He moved to the Pennsylvania State League  in 1915 were he starred for three seasons until the league went into hiatus during World War I. After the war, Leary returned to action as a player, coach and owner of the Nanticoke franchise. Under his direction the Nans were the surprise winners of the 1919-20 PSL title. Leary sold the franchise at the end of the season and returned to the NYSL to play for Utica the next two seasons. In 1922-23, Leary signed a lucrative deal as player-coach of the independent Rome Manufacturing team. The following season, Leary signed with Camden of the Philadelphia Basketball League. Late in the season, he suffered injuries that essentially ended his playing career. After his playing days, Leary turned to coaching. He had great success at Nanticoke (Pennsylvania) High School. He also coached in the (then a minor league) PSL in the 1930’s. Leary surfaced on the major league scene for the last time in the middle of the 1938-39 season when he took over as coach of the Wilkes-Barre team in the American Basketball League.  The struggling team improved to a 10-10 record under his guidance.