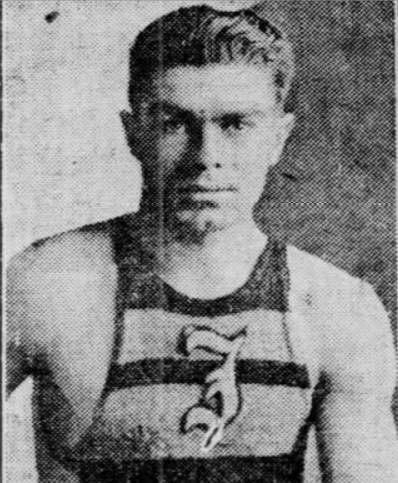 In 1909, Doc Newman, a product of Philadelphia’s tough amateur  basketball leagues, embarked on his eighteen year professional basketball career. Newman made his pro debut with Johnstown in the Central Basketball League where he was immediately inserted into the starting lineup alongside famed scorer Joe Fogarty. Newman and Fogarty remained as partners in the forward slots for the next six seasons. The younger Newman emulated Fogarty’s rough, non-demonstrative style of play. In 1911-12, Newman finished 6th in the league in field goals and together with Fogarty led Johnstown to the CBL championship. When the CBL collapsed in the fall of 1912, Newman and Fogarty returned to Philadelphia and signed with De Neri in the Eastern Basketball League. They both enjoyed immediate success in the new league with Newman finishing just behind Fogarty at the top of the list of EBL field goal shooters. The twosome also led De Neri into a final game of the season showdown with Reading for the EBL title, but came up on the short end of a 27-19 score to miss the championship by a single game. After World War I, Newman enjoyed a successful three-year sojourn with Wilkes-Barre in the Pennsylvania State League. In 1924, he was a member of the Philadelphia SPHAS champion Philadelphia Basketball League team.