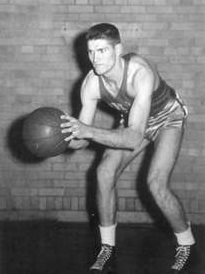 Don Grate was a two-sport star at Ohio State University, lettering in both baseball and basketball in 1944 and 1945. He earned All-American honors for basketball in 1945. Grate briefly played professional basketball and had a  long successful minor league baseball career, playing for 13 seasons (1945–1957).  Grate also appeared in ten games over two seasons as a pitcher for the Philadelphia Phillies and posted a 1-1 record.