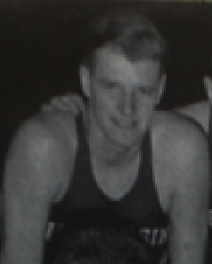 Doug Holcomb was a basketball star at Lincoln High School in MIlwaukee. Holcomb played freshman basketball at the University of Wisconsin before he entered the U.S. Navy in 1941 to serve in World War II. While still in the navy, Holcomb played professional basketball  during the 1945-46 season  for Baltimore in the American Basketball League.  In the fall of 1946, Holcomb re-enrolled at the University of Wisconson where he played one seaon of varsity basketball. Holcomb returned to professional basketball during the 1949-49 season. He appeared in three game for Baltimore in the Basketball Association of America and was a top-ten Scorer for the Scranton American Basketball League team.  In the fall of 1949, Holcomb was hired as  the head baskrtball coach at the University of Scranton where he also earned his master’s degree.  Holcomb settled in Scranton where he worked for many years as a broadcaster.