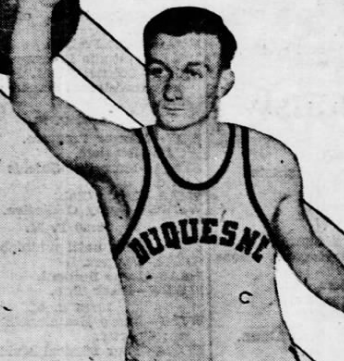 Donald “Dudey” Moore played basketball for Duquesne University  under coach Chick Davies. After graduation, he began coaching high school basketball, while also playing professional basketball in Pittsburgh for four seasons. He was the head basketball coach of Duquesne from 1948 to 1958 and La Salle from 1958-1963. At Duquesne, he compiled a record of 191 games won, only 70 lost, for a .732 percentage. In addition, his teams rolled up winning streaks of 16, 18 and 22 games. In 1952,  Moore was chosen college Coach of the Year by the United Press, and in 1955 his Duquesne team won the National Invitation Tournament. In four seasons at LaSalle, his team’s posted a 79-37 record.