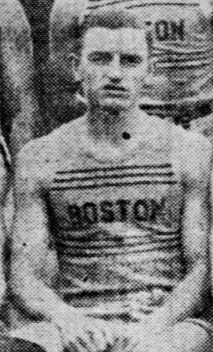 Walter “Dutch Guenther” did not play basketball in high school or college. He first gained notice for his basketball skills while playing in Springfield, Massachusetts church leagues. When he was just 18 years old, he signed to play with the Fisk Red Tops, one of the best independent teams in Massachusetts. By the early 1920’s, Guenther was widely considered to be the best player in New England. In 1923, he led the Massachusetts Interstate League in scoring. When Boston joined the American Basketball League in 1925, Guenther was the first player signed to a contract. He led the team in scoring and was the best all-around player on the team. When Boston dropped out at mid-season, Guenther was quickly signed by the Cleveland Rosenblums who went on to win the ABL championship. In an era, when basketball was a very rough and sometimes brutal sport, Guenther was noted for his sportsmanship and fair play.