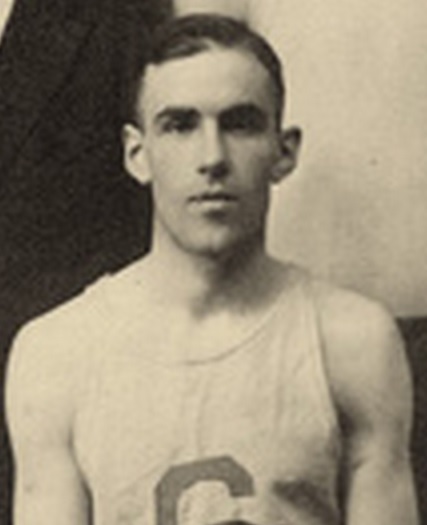 Eddie Dolin was a product of the basketball program set up at the Homestead (Pa) YMCA by famed early pro star, Sandy Shields. Dolin also played basketball as a freshman at Washington & Jefferson College. In 1911, he dropped out of school and signed a professional contract with the Charleroi team of the Central Basketball League. Just 19 years old, he quickly adapted to the pro game under the tutelage of veterans  Jacky Adams and Jimmy Brown. After the CBL collapsed just prior to the start of 1912-13 season, Dolin and his teammates signed to play for Camden in the Eastern Basketball League. During the course of the next eight and half seasons in the Camden colors, Dolin won the adulation of the New Jersey fans with his selfless, hustling style of play. Dolin moved well, was a good defender and a fine shooter. Dolan passed and shot the ball wth both arms over his head. After the designated foul-shooter rule was dropped in 1917, Dolin’s name consistently appeared among the top scorers in the EBL. Dolin played for five and half more seasons after the demise of the Camden franchise in 1923. He made a couple of token appearances in the American Basketball League  and played two and half seasons in the minors before he retired in 1928 after 18 professional seasons.