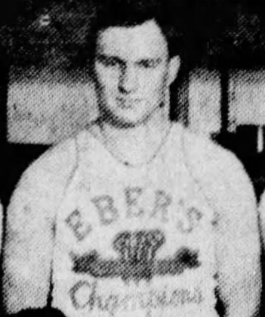 Eddie Malanowicz was a multi-sports star at Fosdick-Masten High School in Buffalo, New York. Malanowicz attended the University of Buffalo  where he was captain of the football and basketball teams. During Malanowicz’ three year varsity basketball career, he led the Bulls to 45-5 record. Starting in 1932, Malanowicz played professional basketball for over a decade splitting his time between Buffalo and Rochester. In the mid-1940’s, Malanowicz coached the Rochester Royals to three straight National Basketball League championship finals, and won the title in 1946.