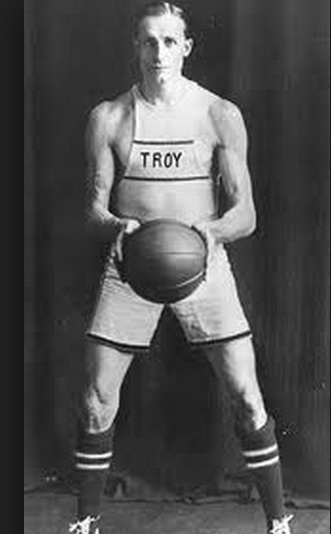 Ed Wachter did not play basketball in high school in his hometown of Troy, New York, but gained an early introduction to the game playing on a teams organized by his older brother, Lew. Wachter turned pro in at age 19 and soon made his mark playing in leagues in Massachusetts from 1902 to 1905. For the next four seasons, Wachter toured extensively with powerful independent teams based in upstate New York and Vermont. In 1909, Wachter began a history making six-year association with his hometown Troy team. Wachter led the Trojans team to four consecutive championships, two in the Hudson River League  and two more in the New York State Basketball League. Troy’s championship streak was broken by a single game the next season by a Utica team starring Barney Sedran and Marty Friedman. The following season, Troy was well on its way to still another title when the NYSL disbanded midway through the 1914-15 season. Wachter possessed a combination of size, speed and agility that few centers of the era could come close to matching. He excelled as a rebounder and defender and was equally adept at scoring on tap-ins or set shots. In addition, Wachter was a fine free thrower who was a strong advocate for rules that enabled the fouled player to shoot his own free throws. Wachter was an intelligent and innovative performer. He is credited with inventing the bounce pass and developing the fast-break offense.In 1915-16, was Wachter’s last full season as a player. In the years that followed, he made token appearances with various teams, but concentrated most of his time to coaching. Wachter began his career as college coach in 1914, while still active as a player and went on to  became the most successful college coach of the first generation of pro stars. During the next twenty five years, He coached at Albany State, Ressselaer Polytechnic Institute, Williams, Harvard and Lafayette. Wachter also was very active in the development of rules and campaigned (without success) for a single national organization to govern basketball at all levels. He also authored books on the game and was a longtime mentor for many young men entering the coaching profession. In 1961, Wachter was elected to the Basketball Hall of Fame.