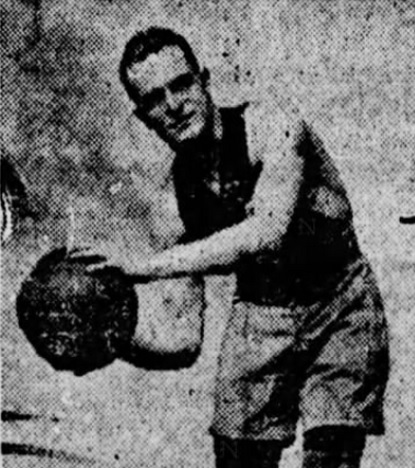 Elmer Ripley began playing basketball as a teenager at Curtis High School in Staten Island  and remained active in the game as a player and later a coach for the next sixty-six years. Ripley began his pro career on independent teams around New York City. He quicky was recognized as an outstanding defensive player, who was also a capable scorer when needed. Ripley enjoyed some of the best years of his career playing in the Pennsylvania State League where he led two different teams (Carbondale in 1916 and Scranton in 1921) to championships. Ripley played briefly with the famed Original Celtics in the early twenties. In 1925, he joined the Brooklyn entry in the newly-formed American Basketball League and was a key element in the team winning the first-half of the split-season championship. Ripley enjoyed one of the longest and most varied coaching careers in college basketball history. While still active as a player, he began his first coaching job at Wagner University where he remained from 1922 through 1925.   In 1927,  he began the first of his three stints as coach of Georgetown University (1927-29) and departed with an impressive 24-6 record. He coached Yale for six seasons (1929-35) and departed with an 82-50 record. In 1939, he returned to Georgetown University were he was 69-39 over four seasons (1939-43). During World War II, he made brief stops at Columbia University, 16-19 in two seasons (1943-45)  and   Notre Dame, a 17-4 record (1945-46).  Ripley returned to Georgetown University for the third time (1946-49) but posted a disappointing 46-49 record in three seasons. He finished out his college coaching career with two years (1949-51) at John Carroll University with 11-32 record and West Point (1951-52) were he finished up at 19-17. Ripley also coached the 1956  Israeli Olympic Basketball Team and the 1970 Canadian Olympic Basketball Team. In 1973, Ripley was inducted into the Basketball Hall of Fame.