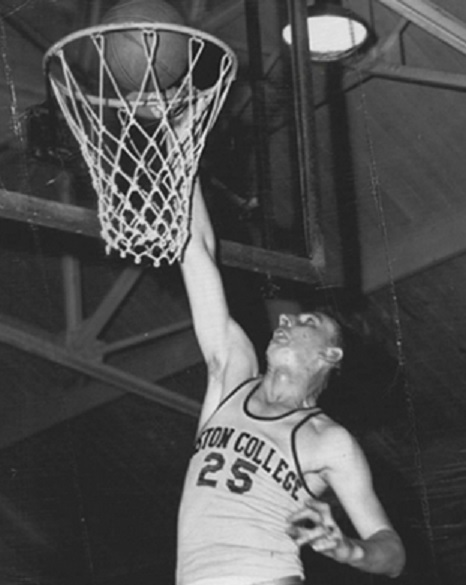 Elmore Morgenthaler attended high school in Hobbs, New Mexico and then worked for the Santa Fe Railroad during World War II before he entered the New Mexico Institute of Mining and Technology in the fall of 1945 as a 23 year old freshman.  There was nothing too unusual about his story up until then, but within a few months, the unheralded young man’s  name would be in every newspaper across the country. For much of the 1945-46 college basketball season, Morgenthaler led all players in scoring before finally finishing in second place behind Oklahoma A&M All-American Bob Kurland and just ahead of DePaul All-American George Mikan. The following season, Morgenthaler transferred to Boston College  where he played most of the 1946–47 season before quitting college basketball at the end of February 1947 to play professionally for the Providence Steamrollers of the new Basketball Association of America.  Morgenthaler would later  put up some impressive numbers during his pro career in minor leagues, but he failed to make any impression in either of  his two seasons in the BAA. During a brief stint with the Philadelphia Warriors, he was described as “being only slightly less mobile than the statue of William Penn atop city hall.” Throughout his playing career, Morgenthaler was listed as a seven-footer, but he was actually closer to 6’10” in height.