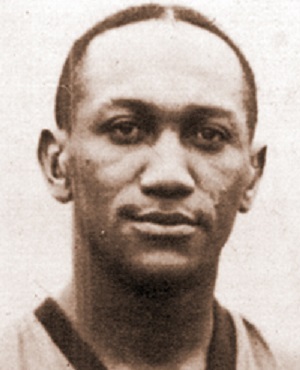 Fats Jenkins was born in Harlem in 1898. He attended high school in Manhattan where he received great acclaim as a baseball and basketball star. As a teenager, Jenkins joined the St. Christopher Club, the most prominent black team in New York City. He also played for the New York Incorporators, the Commonwealth Big Five and the Loendi Big Five.  In 1924, Jenkins joined Bob Douglas’ New York Renaissance team. The Rens barnstormed up to 200 games a year. With the decline of the Original Celtics in the early 1930’s, the Rens became the premier professional basketball team in the country. Between 1931 and 1936, the team compiled an amazing 473-49 record. On a team known for its speed and quickness, Jenkins stood out. He was widely considered the fastest man in basketball and the heart of the Rens fast breaking style of basketball. He was also a relentless defender who excelled at stealing the ball. Throughout the thirties, Jenkins coached the team on the road for Douglas who often did not travel with team. In 1938-39, his final season as a Ren, the 41 year-old Jenkins helped the Rens,  long the uncrowned professional champions, finally formally capture the title at the initial World Professional Tournament in Chicago. The Rens were inducted into the Basketball Hall of Fame in 1963, but surprisingly Jenkins has not been honored as an individual for induction. Jenkins also starred in Negro League baseball for over twenty years including a long stint with the New York Black Yankees.