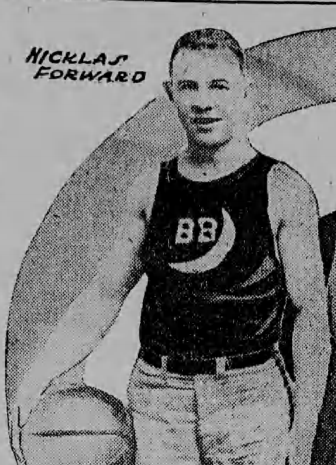 Felix Nicklas was born in Hungary and raised in Brooklyn, New York. He was a multi-sport star at St. John’s Prep in Brooklyn. In 1913, Nicklas entered St.John’s University were he starred on the  varsity basketball and baseball for four years. In January of 1916, during his junior year, Nicklas was suspended  from St.John’s basketball squad because the school learned that he was also playing for the Brooklyn Crescent Athletic Club, one the top amateur sports organizations on the Eastern seaboard. The Crescents played most of their games against Ivy League and New York Metro colleges. but many of their players had formerly played professional basketball and there were wide spread suspicions that the players were being paid to play.  In the  end, Nicklas returned to St.John’s for his senior year and also continued to play on Crescent basketball, baseball and lacrosse teams through the mid-1920’s.  Nicklas was a man who found success in all walks of his life. During his long and very successful business career, Nicklas was an attorney, bank executive, builder and real estate developer.