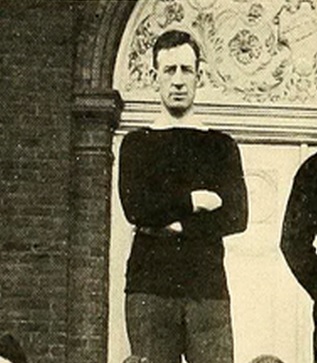 Frank Hill was one of the best centers in the early years of professional basketball. Hill was an outstanding athlete, who was widely admired for his hard work and dedication to the game as well as his strong sense of fairness and integrity about how the game should be played. Born in Paterson, New Jersey, Hill was still in high school when he began playing pro basketball in 1903 with his hometown team, the Paterson Crescents. For the next decade, with Hill as a mainstay, the team remained among the very top echelon of pro basketball. In 1909, after touring as an independent squad for a half-dozen seasons, the Crescents joined both the Hudson River League  and Eastern Basketball League. Paterson finished the 1909-10 HRL season in second place just one game behind the powerful Troy Trojans. In 1910-11, the same two teams battled late into the season with the same result, this time Paterson missing the championship by just two games. Hill engaged Troy’s star center Ed Wachter in many memorable battles. By the 1913-14 season, Paterson’s fortunes had declined. The Crescents could manage only a 5th place finish in the New York State Basketball League and Hill was suspended by the team for refusing to take road trips. With his playing career drawing to a close, Hill was busy building a new career for himself as a referee and coach. Hill quickly established himself as one of the most respected referees in pro basketball. He also became a highly successful college coach. Hill coached Seton Hall to a 45-11 record in five seasons and compiled a 220-166 record at Rutgers during his 28-year tenure as head coach.