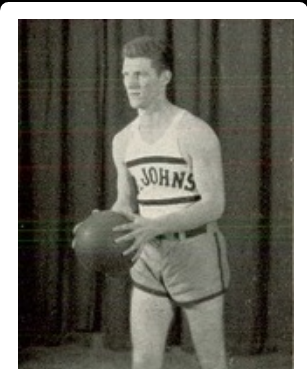 Frank McGuire, was born on Nov. 8, 1913, in Greenwich Village, New York. He attended St. Francis Xavier High School, where he later taught history and coached for 11 seasons. McGuire was four-letter man at St. John’s, University from where he graduated in 1936. He played professional basketball for two seasons with Brooklyn in the American Basketball League. McGuire returned to his alma mater in 1947 as head basketball coach. After compiling a 103-35 five-year record at St. John’s,  McGuire left New York in 1953 to become the coach  at the University of North Carolina.   McGuire compiled a 164-58 record at North Carolina before leaving to become the general manager and coach of the Philadelphia Warriors during the 1961-62 season.  When the  franchise was sold and moved to San Francisco the following year, McGuire resigned. In the spring of 1964, he became the coach at South Carolina, where in 16 seasons his teams won 283 games and lost 142. During 30 years of coaching college basketball, at St. John’s, North Carolina and South Carolina, McGuire posted a 550-235 record and played in 22 post-season tournaments.  McGuire was named National Coach of the Year three times and  in 1977, he was elected to the National Basketball Hall of Fame.