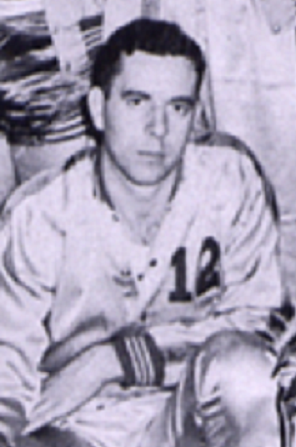 Frank Otway’s basketball odyssey is an interesting microcosm of sports during World War II and the chaotic post-war years. Otway was a star high school athlete in East Orange, New Jersey. Otway entered the Marines in 1943 and was  assigned to an ROTC program at the University of Chicago. While in college, he played independent basketball with the Arlington Heights American Legion and signed  to play a single game for the Chicago Bruins of the National Basketball League. After the war, Otway played pro basketball in New Jersey for one season  and the following season played freshmen  basketball for Long Island University. In 1948, Otway enrolled at Rider College in New Jersey where he played varsity basketball for the next three seasons. During his first season at Rider, he was simultaneously  playing professional basketball for a team in Poughkeepsie, New York.