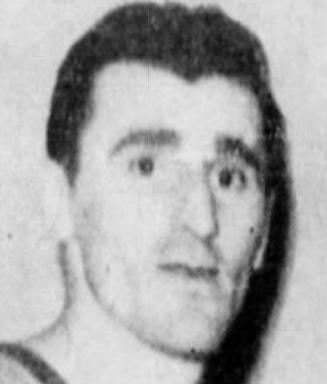 Fred Crum was born, raised and lived all his life in the Greenfield neighborhood of Pittsburgh. For twenty years the name Fred Crum and Pittsburgh basketball were synonymous. Crum was the star of the 1931 Schenley High School team that won the Pittsburgh City League championship. Crum led the Wilmerding YMCA to the 1936 national YMCA championship in Peoria, Illinois to earn the right to participate in the Olympic Trials at Madison Square Garden. Crum was named first alternate to the 1936 Olympic Team. During the 1940’s, Crum played in five World Pro championship tournaments in Chicago. Crum spent the 1944-45 season in the National Basketball League as a starting guard for the Pittsburgh Raiders.