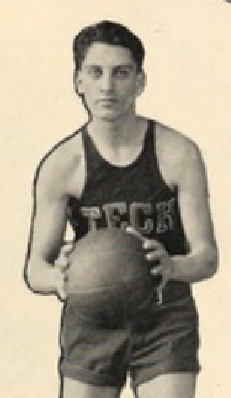 Fred Jacobs was a three sport star at Woodward High School in Toledo, Ohio.  In the early 1930s, Jacobs played both semi-pro basketball and football. Jacobs also made some appearances on the major league level with Toledo-based teams. During the 1932-33 season, Jacobs was a starter for the Toledo Crimson Coaches who made it all the way to the National Professional Basketball League championship finals. Jacobs’  brother Amos, under the stage name Danny Thomas,  was a famed comedian, whose career spanned five decades.